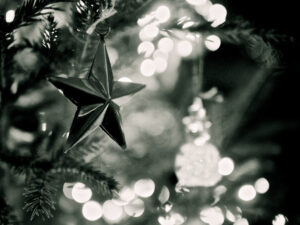 “What is it?” Nick called irritably, pushing himself up onto his elbows in bed.

The door opened a little, and Takehiko leaned in on an angle, his hair swinging past his shoulder to hang like a curtain.

“I just think I should tell you. There is a tree in the living room.”

“A sort of evergreen tree, with … ” He sketched circles in the air with the hand that was not holding onto the door. “With things all over it, hanging off of it.”

“Oh. A Christmas tree.” Nick lay back down. “I thought you meant there was a tree growing out of the floor or something.”

“No, it is not growing. It is in some water, but it is not going to last very long like that.”

“Yeah, well, Christmas is in a week.”

“Why is it there?” Tacky persisted.

“I don’t know—I guess the house put it there. I guess it knows Christmas is coming up.”

“No, the tree. I know Christmas, I am not stupid—but why does it have a tree?”

“I don’t know.” Nick yawned hugely. “It’s just something you do. It’s a tradition.”

“No, it’s just a tree. You put decorations on it, and you put presents under it, and—”

“What, you give it presents, but it is not a sacred tree?”

“No! The presents aren’t for the tree, numbskull. They’re for your family and stuff.”

“No, you don’t.” He looked at Takehiko for a moment. “You’re having me on again, aren’t you? This is like the time you pretended to think Battlestar Galactica was a documentary, isn’t it?”

Tacky ignored this. “Do you think I should put a present under the tree, in case it gets angry? It will soon be dead, but if it is a sacred tree … ”

“Yeah, you should,” said Nick, rolling over to face the wall. “You should buy me an iPhone. And put it under the tree. I think that should definitely appease it.” He pulled the covers over his head and went back to sleep.

He got up later that morning, to answer a phone call. It was his father, and the conversation ended with Nick shouting that if it was going to be like that, he wasn’t coming home for Christmas at all. When he finally went into the living room, he had forgotten all about the tree. The living room was all in white and unfinished wood that week, with wicker baskets, the bookshelves concealed behind frosted glass. The Christmas tree stood in one corner, tastefully decorated with iridescent glass balls and small white lights. Something lay on the floor under its lowest boughs: something white and silver, with a bundle of white wires. Nick bent down and stared. It was an iPhone. Sitting on top of it was a little stylized wolf folded out of silver wrapping paper.

Takehiko was in the kitchen, watering the plants on the window-ledge near the fridge.

“Where did this come from?” Nick demanded, brandishing the iPhone.

“These things are expensive—they’re like hundreds of dollars. How did you … you don’t even have any money, do you?”

But that wasn’t even the most perplexing thing. “That was just like a couple hours ago that I told you to get me one—and it was a joke, anyway—when did you buy this?”

“You don’t get things off the Internet, Tacky. You still have to pay for them.”

“No, I don’t.” He was giving Nick the same look as when he had to explain to him how to use the rice cooker: the I’m-not-even-from-this-century-how-can-you-be-so-dumb? look. He set down the watering can. “I will show you.”

Nick followed Tacky down the hall to his bedroom. In those days Nick had never been inside Tacky’s bedroom, just looked into it from the doorway when he was trying to find his own room and failing.

“Lucky,” he remarked, when the first door Tacky opened was the right one. Tacky gave him a look, and he remembered that it wasn’t luck. The room, he noted, was disgustingly neat.

Tacky folded himself down onto the cushion in front of his low, coffee-table desk, as tidy as the origami wolf. He tapped at the keyboard of his computer to wake it. Even from the doorway, Nick had noticed Takehiko’s computer. It was not, in his opinion, the sort of set-up that someone from the sixteenth century ought to have owned. A screen-saver of a Chinese dragon undulated across the giant display, and cables snaked over the desk to printer, scanner, speakers, all neatly arranged. The computer awoke with a purring of fans, and transparent windows full of Japanese text cascaded over a water-colour landscape.

“Is that … Linux or something?” Nick asked, as Tacky closed windows and clicked through menus.

“The … never mind. Where did you get this computer, anyway?”

“So it is very easy,” said Tacky, ignoring the question.

He had opened a browser window; a banner at the top of the home page read Bakemono.net in elegant brushstrokes above columns of Japanese text and cartoony graphics. He tapped in a url, typing with two fingers but surprisingly fast.

“Amazon Japan?” Nick observed sceptically. “I’m pretty sure you have to pay for things there.”

“It has to be somewhere with pictures. That is how it works.” Tacky twirled the cursor around one of the images. “Pretend I want to get this thing.”

“That’s an electric razor. Do you even shave?”

He speared the image of the razor with the cursor and dragged it down to a round, glistening white icon at the bottom of the screen. The white icon bounced up and down a couple of times, and then was still. A dialogue box with a line of characters materialized.

“Multiplicated according to time. Or something. It is Chinese.”

“I think many computer things come from China.”

Tacky had reached over to twitch back a blue-and-white quilt that had been covering a bulky object on a shelf next to his desk. Nick stared in perplexity at what looked to him like a construction of Mechanos inside a fish-tank. Tacky flicked a switch at the side of this object, and a sort of syringe suspended from a rail at the top slid back and forth experimentally, with a soft whirring noise.

“What is that?” Nick demanded.

Nick peered at it. “Is it a 3D printer? It looks kind of like it might be a homemade 3D printer.”

The hanging syringe began to fill, inexplicably, with a rose-coloured, uncomputerlike light. Then, in a series of movements too fast to follow precisely, it whizzed back and forth on its rail, while the rail moved on its own trajectory within the fish-tank, and the red light sketched out a complex three-dimensional object in the air. The light blinked out, there was a little plunk, and the electric razor from the computer screen lay on the black platform at the bottom of the fish-tank, sealed into its plastic package. Tacky reached in and extracted it. He handed it to Nick. The plastic was slightly warm to the touch.

“I see,” said Nick. “That’s how you got the iPhone.” He set the packaged razor down on the desk. It was freaking him out a bit.

“That’s … Did the computer make the origami wolf as well?”

Takehiko looked at him incredulously. “Of course not. It is a computer.”

“No, Tacky—it’s a friggin’ science fiction machine. Computers don’t just make things like that. Even 3D printers—I’ve seen them work before, and they don’t just produce random things from the Internet.”

“They can make erect– um—electronic things only. That is their magic.”

Tacky shrugged. “Maybe the cheap ones that are not so good … ”

“Okay. So. People do not normally turn into wolves.”

“Right.” He lived in an apartment where the rooms moved around and the living room redecorated itself at will; he really shouldn’t be surprised by these things any more. All the same, Nick looked doubtfully from the Mechano-filled fish-tank with its now empty syringe to the iPhone which it had apparently produced from thin air. “Are you sure it’s okay for me to keep this thing? It isn’t, like, the proceeds of crime, or … necromancy or something?”

“No. I understand. You are not supposed to ask how much did it cost, are you sure you did not steal it off the Internet. You are just supposed to say thank you. ‘It is the thought that counts.’”

“Yeah … I don’t know what the thought was, exactly. But thanks. I mean, it is an awesome present.” He turned towards the door, then stopped, and looked back at

Tacky. “So if the computer didn’t make the paper wolf, I guess you did.”

Takehiko raised his eyebrows. “I did not try to be cute. I had to make sure the tree knew that the present was for you.”