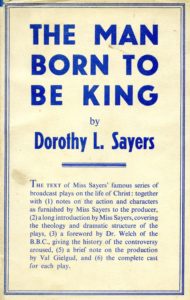 Dorothy L. Sayers’ series of twelve radio plays, collectively titled The Man Born to Be King, was first broadcast by the BBC between 1941 and 1942. The texts were published in 1945. They cover the events of the life of Christ, from Nativity to Ascension, adhering closely to the Gospels but with lots of vivid detail and convincing characterization. They remain very readable, even though they were written to be accessible to British audiences more than 70 years ago.

Several years ago, the 20s and 30s group in my parish decided it might be fun to read through these plays during Lent. We divided the series into seven evenings: two plays per night for the first five weeks of Lent, one in the sixth week, and the final play, which deals with the Resurrection, after Easter. We took parts and read aloud as a group. It took some planning and dedication, but it was well worth the effort. Our idea was to read the plays as a Lenten devotion rather than for critical discussion, but because we would break for dinner between the two plays each evening, there was also time for conversation. A few years later, we repeated the series, but with a larger group, inviting the whole parish to join in. The first time around, we were able to assemble enough library copies of the plays for everyone (we’re blessed with an excellent public library system and a major research university on our doorstep), but the second time some photocopying was needed to supplement the available books.

Members of our reading groups were particularly struck by the humour that Sayers is able to inject into the Gospel accounts without irreverence; the complexity of her portrayal of Judas, whose motivation is explored in convincing detail; and the intricacy of the politics leading up to the Crucifixion. We found it helpful and moving to see the events of Scripture enlivened and put into a skilfully imagined context. Although we agreed that the character of Jesus, more than the others, tends to speak lines straight out of the Gospels—and perhaps we would be uneasy if he didn’t—the plays do a good job of emphasizing Christ’s humanity. Possibly my favourite line comes after the Sadducee poses his elaborate hypothetical question about the woman who keeps marrying successive brothers (made even more laborious in the play because the questioner keeps getting interrupted by hecklers). Sayers has Jesus respond: “That is a very silly question.”

I had the job of dividing up parts for group reading both times that we did this. Because we didn’t have a set group meeting each time (people would come and go), I had to come up with a flexible system for allocating parts on the spot. And because the plays have a large number of characters, including many bit parts, a lot of doubling was necessary. After putting all the work into doing this twice, I decided to turn my tables and character cards into a pdf document for other church groups to use in planning their own reading series. It includes general instructions for allocating parts, and my advice on some aspects of how to run the readings themselves. I hope you find it helpful, and I would love to hear from anyone who uses it! 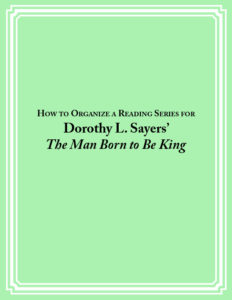