Bonus Pages for “The Siege of 7C”

The stereo on top of the fridge was blasting a compilation of ’80s music that Nick’s brother Carlos had made for him. It was Yiannis’s favourite. He was capering around the newly clean kitchen, singing along to some ridiculous synthesizer song. It was a definite improvement, Nick thought, over the sobbing and screaming which had been his first reaction to Rose’s news. Tacky was sorting laundry in the corner by the washing machine. Nick was sitting at the table, trying to fill out a form.

“Yiannis,” he said, seizing his opportunity as the song ended, “how do you spell your last name?” 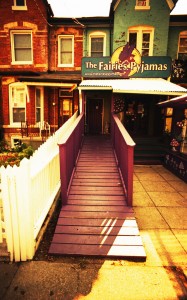 “Yiannis! I’m filling this out in pen—will you be serious?”

“We’re birds—doot-doo,” Yiannis sang along with the stereo, “of a feather—doot-doo!”

“Yiannis, can you calm down for two seconds?”

Yiannis pushed himself off from the chair and skidded towards the washing machine. Tacky straightened up hastily and caught him by the horns.

“Pay attention to Nick,” he said, walking Yiannis around so that he was facing the table. “You have to fill out the form before you can go to Australia.”

“Oh, okay.” Yiannis climbed obediently into a chair and sat waggling his hooves and only mouthing the words to the song.

“Cool. Um … ‘Previous place of residence’ is here, obviously … ‘What special talents do you bring to Syrinx Colony?’ Let’s just put ‘Enthusiasm’ and … ‘Energy.’ You’ve already been accepted, right, so it probably doesn’t matter what we put.”

“‘Name of Primary Sponsor,’” Nick read out. “White, Rose. ‘Relationship.’ Um … Landlady? I don’t know. I’ll leave that blank and she can fill it in. ‘Species.’ Human. ‘If human, secondary non-human sponsor must be specified.’”

“Put down Tacky.” Yiannis twisted around in his chair. “You’re going to be my non-human sponsor, right, Tacky?”

“Nothing—you just have to have your name on the form. Do you know how to spell Tacky’s name, Nick?”

“Tacky’s not a lazy asshole!”

“It’s a meadow nymph,” said Yiannis. “But dryads are my favourite. My mommy was a dryad.”

“I’m not reading it out. It’s totally not applicable. You’re eight.”

“Nick,” said Takehiko, “what are these?”

Nick looked up. Tacky had a pair of Nick’s jeans in one hand, and several small green plastic packets in the other.

“They were in your pocket. Are they important?”

Tacky looked at the things in his hand as if he had just been told that they were slugs. He deposited them on top of the dryer and wiped his hand on his jeans.

“How come you’ve got your pockets full of condoms, Nick?” asked Yiannis.

“Yiannis … ” said Takehiko. “I do not think we need to know.” He went back to putting clothes into the washing machine.

“I thought you didn’t even have a girlfriend, Nick!” Yiannis persisted.

“I don’t. It’s not like I’m planning on using those things. Some smart-ass Sidhe gave them to me as a joke. I didn’t even remember they were in my pocket.”

“I don’t have a girlfriend! God. I’d have told you guys before now if I did.”

Tacky turned around, leaning on the dryer. “Why does it have to be a girlfriend? Maybe he has a what-do-you-call—a man friend?”

Yiannis squealed. “Do you think?”

“No, not really. I just wanted to see that look on his face.” He was grinning as he turned back to the washing machine. 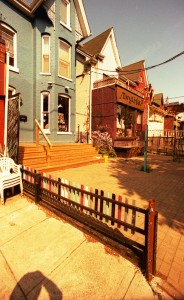 “You guys are both bastards,” said Nick.

He looked back down at the form. He was going to miss Yiannis, he realized. So was Tacky—probably more, since the satyr had been his only constant company in 7C.

“You’ll have to message me in Australia to tell me,” said Yiannis, a little sadly.

“Oh, I will. I mean really, from the sound of this place where you’re going … I’m probably going to be messaging you to ask for advice.”