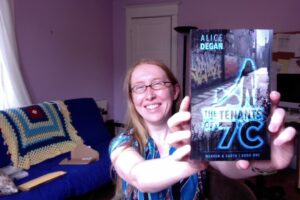 Right next to my computer keyboard on my shiny red desk is a small stack of books: only two books, but both of them have my name on the cover. One of them is big and serious-looking, and the other is small and cute. It’s the small, cute one I want to tell you about today.

I started writing the Heaven & Earth stories back when the years still had two zeros in the middle, and the first three were published, as individual ebooks, last year. I’ve finally collected them into a single volume, with a snazzy cover created for me by the lovely Kerry Dickson.

Whereas From All False Doctrine was hyped pretty big in my little social circle (if that’s enough of an oxymoron for you), I feel like The Tenants of 7C has almost snuck up on me. I was a bit surprised by how delighted I was when the first proof copy arrived in the mail. It didn’t even feel like it should have been a big deal—but somehow it was.

So here, for those of you who haven’t read the stories yet, is the scoop. This one is a little bit different from False Doctrine. For one thing, it contains about 100% less liturgy. 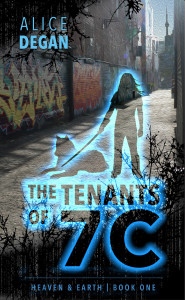 On a back alley in Toronto’s Kensington Market, above the Heaven & Earth Bakery, there’s an apartment with a room for rent. The rent is negotiable. The location varies. Humans need not apply.

For Nick, who calls 7C home, real life can be a lot weirder than his friends’ role-playing games. Between regular stints at his job delivering bread and cinnamon buns to the otherworldly population of the city, these days he finds himself dodging attacks from vampire-hunting tourists, possessed pigeons, and his boss’s unborn child.

Welcome to a world of obnoxious fairies and bored vampires, satyrs who love ’80s music and demons who play video games. Welcome to 7C. Good luck finding the bathroom.

Available at: Amazon | Indigo | Kobo | Barnes & Noble | iBooks | and anywhere else you can order books!

If you’ve already started following the adventures of Nick and Tacky and their friends (and enemies), then I have something new for you too! Episode Four, “The Silver Bullet Gambit,” is out in ebook form. I hope you like it.

The first time the employees of Stake Inc. tangled with the tenants of 7C, it almost put the urban vampire-hunting company out of business. Now they’re rebranding. Clare was the one who got them into trouble that time, but she’s been offered a second chance. She just has to decide whether or not it’s worth the risk to take it. In the meantime, she has the question of her possible fairy heritage to sort out … and then there’s this scavenger hunt …