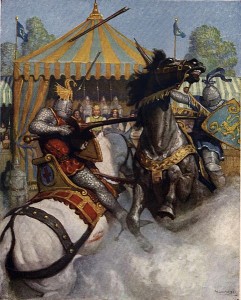 This is a quiz I made up for the last day of my Arthurian literature class. I thought I’d share it here, to help you determine how you’d fit in if you found yourself unexpectedly plunged into an Arthurian romance.

1. You meet a beautiful maiden, scantily clad, sleeping alone in a tent. What do you do?

a) Try to steal her jewellery.
b) Hop into bed with her.
c) Ask her if she’s seen Guinevere.
d) Keep riding, because she is probably the Devil.
e) Strike up a conversation, but if she doesn’t seem interested, then move on.

2. You find a magnificent bed, but are told that you are unworthy to sleep in it. What do you do?

3. You meet an armed knight in a forest. What do you do?

4. Someone has abducted Guinevere! How do you respond?

a) That’s too bad! My mother told me never to abduct people.
b) It is my duty to rescue her.
c) CATASTROPHE OMG NOTHING WILL STAND IN MY WAY I WILL RESCUE HER
d) I hope she had a chance to confess her sins. Some hermit told me she had a lot to confess.
e) Should we alert the authorities?

5. Someone suggests you should ride in a cart.

a) Sure! What?
b) You have got to be kidding.
c) WILL IT HELP ME RESCUE GUINEVERE? THEN SURE
d) Does this cart have the words “Only the best knight in the world destined to achieve the Grail may ride in me” written on it? Because if not, forget it.
e) I don’t understand what all the fuss is about. It’s just a cart.

6. It is the Feast of Pentecost. Where will you be?

a) I don’t know. I don’t even know what year it is.
b) At Arthur’s court, obviously.
c) Probably locked in a tower somewhere, but I’ll get out.
d) At Mass. Obviously.
e) Uh, I don’t usually do much for Pentecost.

7. What was the last thing that caused you to swoon?

a) The thought of my beloved.
b) Loss of blood after an hours-long combat with a worthy opponent.
c) Catching sight of an item that my beloved might once have touched.
d) The Holy Grail.
e) I can’t recall ever having swooned.

a) See that goose-blood in the snow? That’s what she looks like. *goes into a trance*
b) Uh, she’s got tusks, and, uh, a beard, and …
c) For the last time, I don’t have an ideal woman. Who told you I had an ideal woman? Did someone mention Guinevere?
d) She’s a nun or something. Also she’s dead.
e) She’d have a great sense of humour, love dogs, and like to take long walks on the beach.

mostly a) You are probably Perceval.
Your knightly career gets off to a rocky start, and you have a bit of a problem with questions, but ultimately, you’ll be able to achieve great things. Too bad you’ll eventually be relegated to second place in your own story by Galahad.

mostly b) You may be Gawain.
Arthur’s right-hand man and loyal nephew, you’re generally dependable but don’t often get the limelight. Mostly your job is to serve as the model of knighthood for others to measure themselves against (or randomly joust with). And what do you get in return? Married to a revolting hag. Thanks, Arthur.

mostly c) You are definitely Lancelot.
Congratulations, you are the best knight in the world. Except when you’re not. Sorry about the crazy girlfriend. That Grail thing totally would have worked out if it hadn’t been for her.

mostly d) You must be Galahad.
Super-virgin, destined to win the Holy Grail, you’re the actual best knight in the world, and you know it. Some people find you boring, but what’s that to you? God clearly thinks you’re awesome.

mostly e) You are doing it wrong.