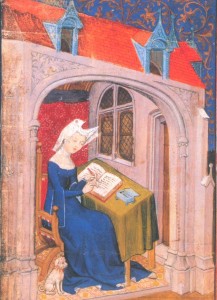 In some circles you’ll find people who suggest that a literature degree doesn’t offer a good formation for a fiction writer. I’ve not found that to be true at all. Of course you don’t need a PhD, or to have studied English in any formal setting, in order to write well. But I’ve found that my studies feed my creative work, shape the things that I write both formally and thematically, and have taught me a lot about ways and reasons to write that I think are valuable and good to know. Here are a few, in no particular order.

Writers can have a moral purpose. Yes, and they can write with their moral purpose in mind without producing trash.

Originality is not only overrated but actually chimeric. Everyone has sources and influences, and learning how to recognize and manage them is a big part of using your creativity in a mature way.

Literary forms and styles go in and out of fashion, and everyone is influenced by their own historical situation. I could try to write in the form and style of a past era, but inevitably I would betray my own period in many ways, and some would be ways in which I would want to betray it (e.g. attitudes toward gender, race, class, etc.). Therefore your best bet is to embrace this to some extent. You can do a lot of fruitful work with the pattern of taking a type of story from the past and telling it as only a modern person can tell it, including perspectives that someone from that time would not have considered (e.g. servants) or using a style (e.g. realism) that they wouldn’t have used.

It’s helpful to think about the traditional boundaries of the genre or form you are working within, but a lot of the best work is done right on or just over those boundaries.

Good writing has themes, but you don’t necessarily have to put them there.

Good writing may require a reader to think a bit, and will certainly repay study.

If you manage your sources and influences well, they can spread out like a web around your writing, becoming part of the experience of your work for the reader.

It’s not about you. The author doesn’t matter as much as the work. In fact, you can create work that is better than you. This is amazing, even miraculous.

You are one of the people who gets to inhabit your work, but when other people read it, they get to inhabit it too. They get to know the characters and draw their own conclusions about the story, and you can’t entirely control or invalidate their experience of it. This is not controversial; this is just a fact, and you shouldn’t really try to argue with it. It’s part of the miracle of creation.

These are just a few big-picture examples, but if someone were to ask me whether I think an aspiring writer should take English at university, I’d say, “Absolutely.”