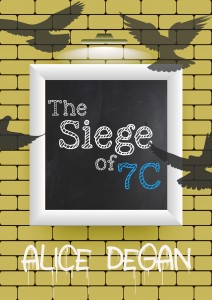 I’m happy to report that the second of the Heaven & Earth stories, “The Siege of 7C,” is up on Amazon, Kobo, and Smashwords! (Oh, and the first one, “The Tenants of 7C,” is up too, if you missed it.)

The series is urban fantasy, which just means it puts fantastic characters in a modern city. It draws inspiration from Japanese manga, a medieval poem about a werewolf, and my personal love of Toronto’s Kensington Market. (Sounds like a coherent mixture, right?)

I have twelve stories planned in this series, so if you like them, stick around for more! I plan to collect them into paperback editions eventually, but for now they are available as ebooks. They’re novella length; the first two are fairly short, but the third one, which I’m working on now, is going to be significantly longer.

Here’s the synopsis for “The Siege of 7C”:

When you live in an apartment where the rooms move around, with a satyr and a Japanese demon as roommates, fantasy role-playing games aren’t as exciting as they might be. But those dice-roling skills may come in handy when confronted with a flock of otherworldly pigeons. Nick, Takehiko, and Yiannis, the tenants of 7C, return in a second adventure.

There’s also a bonus mini-story, “Birds of a Feather,” which serves as an epilogue to “Siege.” You can find it here.

This is all still so exciting to me. I have two books out in the world now! Two! (Just little books, but still.)