“What?” seyde Sir Launcelot, “is he a theff and a knyght and a ravyssher of women? He doth shame unto the order of knyghthode, and contrary unto his oth. Hit is pyté that he lyvyth.” 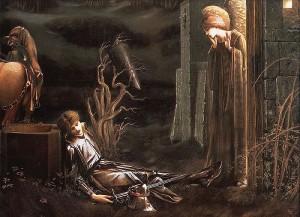 A while back, a certain mystery writer caused a minor furor online with an article in which she suggested that J.K. Rowling shouldn’t publish any more books for adults under her own name, because she’s too famous, and her easy success makes things harder for everyone who is less famous. Now, as loads of people all over the Internet were quick to point out, this is all kinds of ridiculous. There’s just one aspect of it that I want to address.

When I read the article, I happened to be halfway through Rowling’s latest book, her mystery The Cuckoo’s Calling. It’s great fun, and it’s clearly set up to begin a series; it introduces two really delightful protagonists whose continuing adventures I can’t wait to read. The idea that somehow, for the good of humanity, these sequels should never see the light of day, I took almost as a personal affront. It seemed like somebody suggesting that I should never have met a couple of good friends, or that they should avoid me in future so that I can get to know other people, or something. What kind of a misanthrope would make an argument like that? Of course, the author of the article admits that she has never read any of Rowling’s books, so she didn’t really know what she was advocating, which doesn’t make it better. But the reason this writer wants Rowling to retire from adult fiction (she doesn’t care about fiction for young readers, by her own admission) is because she thinks hits like The Cuckoo’s Calling draw attention away from the work of struggling writers in the mystery genre. In other words, she wants me to read her books instead of J.K. Rowling’s. Of course this makes me not want to, ever, on principle. And I found myself thinking: well, surely this woman’s books would be full of small-minded, uncharitable, sour-grape-sucking characters who hate children’s literature. Why would I want to read about them?

But that doesn’t make any sense, and that’s where the quote from Malory comes in. Let me give you some backstory.

Sir Thomas Malory is known to us today as the author of the great Arthurian compendium, Le Morte Darthur. He was known to the authorities in the fifteenth century, when he lived, as trouble. We don’t know exactly what he did or didn’t do, because he was never brought to trial, but he was accused of an alarming list of crimes including rape (two counts involving the same married woman), church robbery, vandalism of a deer park, and an attempted assassination. It’s pretty clear that the charges were politically motivated to some degree, that he had made a powerful enemy—the man he allegedly tried to assassinate—and the fact that he was never brought to trial suggests that his accusers, who had gone to some lengths to assemble a long list of charges all at once, were afraid they wouldn’t stick. But the number of witnesses, conspirators, and victims supposedly involved also suggests that the charges weren’t all fiction. In the event, Malory was held in various prisons for almost a decade, awaiting a trial that kept getting put off on the same flimsy pretext. There was a regime change (this was during the War of the Roses), he was released and pardoned, and then seems to have got himself in trouble later with the opposite side and been imprisoned a second time. We don’t know what he was accused of this time, if anything, but it was apparently during this later period of imprisonment, which lasted almost until the end of his life, that he wrote the Morte Darthur.

Malory was a knight; he tells us this at several points in his work, as well as reminding us of his imprisonment and asking for our prayers. The Morte Darthur, which is the only thing we know he wrote, positively coruscates with knightliness. Its author seems heavily invested in showing us an ideal of chivalry, and that ideal is embodied in the character of Sir Launcelot. Sir Thomas obviously loved Launcelot. He could afford to, in a way, because he didn’t invent him—he didn’t invent very much in the Morte Darthur. But he had a definite idea of how he wanted us to perceive his hero, and he does what he can to present him in the best possible light, without departing too radically from his sources. Sir Launcelot emerges as a flawed but magnificent character, impossible not to admire, whose failure in the Grail Quest is more moving than his son’s ultimate success.

It’s early in the Morte Darthur, long before the Grail and the revelations of adultery and the destruction of the Round Table, that Launcelot hears of a knight who “distresses all ladies and gentlewoman,” either by robbery or by rape, and asks indignantly, “Is he a thief and a knight and a ravisher of women?” He could (allegedly) be describing the author. “He doth shame unto the order of knighthood,” Launcelot declares, “and contrary unto his oath. It is pity that he liveth!” Tellingly, this is a passage not found in Malory’s sources.

Chaucer’s venal Pardoner declares, “though myself be a ful vicious man, / A moral tale yet I yow telle kan.” With Sir Launcelot, Malory seems to go even one step further, creating a character who, though flawed and ultimately tragic, embodies an ideal of which the author himself fell short, and allowing him to point this fact out within the text.

Of course, I may be reading too much into this. It’s quite possible that Malory didn’t think of himself as doing “shame unto the order of knyghthode.” It’s possible that he was falsely accused; the rape charges are particularly suspect, actually, because they were brought by the woman’s husband, which may mean (by a quirk of fifteenth-century law) that the act in question was consensual adultery, in other words the same thing Sir Launcelot himself is guilty of. But breathing life into characters who are better than ourselves is what all authors surely want to do. I like the idea that Sir Thomas might have been wryly conscious that this was what he was doing with Launcelot.

So it would be perfectly possible for a writer who expresses uncharitable opinions in real life to write books full of great-souled, magnanimous characters. Alas, that doesn’t mean that I’m going to seek out the works of the author whose article I mentioned. I suppose if I’d lived in fifteenth-century Warwickshire and knew Thomas Malory only as that thug who robbed abbeys and extorted money from monks, I might not have wanted to read Le Morte Darthur either. Which is sad, but also kind of logical.