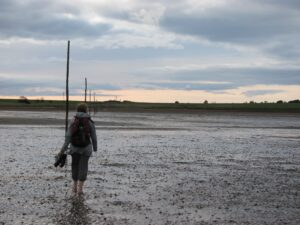 It started, I suppose, nearly two years ago when I went into the local BMV bookstore with my friend Victoria, and we browsed through the Writing section and found a book called The Indie Author Guide. I think it was the cover picture that really drew me in: it shows a laptop on a sidewalk table outside an apparently empty, turquoise-painted, bohemian-looking café. The only way the picture could be more appealing to me would be if there were a big mug of Earl Grey or a London Fog sitting next to the computer (which, by the way, when you look at it closely, is clearly a MacBook). And maybe a chocolate croissant or something. The title was intriguing, too. “Indie”? What does that mean, for an author? Turns out, it means self-publishing. I bought the book, though at the time I didn’t think I was seriously interested in self-publishing. But maybe I can learn something, I thought.

The Indie Author Guide was published in 2010, so it is now significantly out of date, but it was eye-opening for me. It introduced me to the concept of print on demand, the process which makes it possible to become a print publisher of without investing thousands of dollars in inventory and filling your basement with books that you have to try to convince local bookstores to stock on consignment. Of course, the other pieces of the puzzle that make indie authorship feasible are ebooks and the online publishing platforms offered through Amazon, Kobo, and other retailers. The paradigm is so different that it does seem to warrant a different name. Old-school self-publishing could be profitable if you had books that fit a specific niche and knew how to market to it: for instance, local history guidebooks which you plan to sell through museums and historical sites; or textbooks on sheep brain physiology which you know you can market to psychology professors. And this is still a good model for striking out on your own. The more you know about who would be interested in your books, the better you can tailor your efforts to reach them. But today’s indie author only has to worry about getting the word out, not distributing the books themselves; print-on-demand technology and ebooks take care of all that.

It took me a long time to come around to the idea that this was the right path for me. I discovered Joanna Penn’s Creative Penn podcast in the winter of 2012, when I was spending a lot of time in my basement making notebooks as Christmas presents for my friends, and wanted something to listen to. She had over 100 episodes in her backlist, and I started listening in reverse chronological order and getting more and more interested. I’ve found an email that I wrote to her in January of 2013, which describes where I was in my thinking at that point:

When I found your podcast, I was thinking about self-publishing as a possibility for my novel-in-progress; now I’m genuinely excited about it. … After listening to you talk to so many diverse and interesting writers, I feel that, should I choose the self-publishing path, I will be in very good company.

The novel was From All False Doctrine, which I finished at the end of April, 2013. By that time, I think I had almost completely made up my mind to go indie. Why was it a difficult decision? Well, as I said in my last post, I’d been writing for a long time without publishing anything to speak of. In fact, I hadn’t submitted very much; I sent out a few queries for things, but I never really went through that process that veteran authors talk about where you amass stacks of rejection letters from agents and editors and magazines. I have a few in a file somewhere, but not enough to paper my bathroom or anything. But my definition of writerly success remained connected to publishers. If I short-circuited that whole process, would I miss a crucial rite de passage? Would I feel as if I weren’t legitimate, hadn’t been validated as a writer? And then, of course, would I risk sending a half-baked, shoddy piece of writing out to a deserved oblivion? Well, I didn’t think so—but then, nobody ever does, right?

But gradually I was getting more and more excited about the advantages of indie publishing. Greater control over the details of your book and its release ranks high on the list. Traditionally, authors often have little or no control over cover design, and books can take a long time to come to market; when you’re doing everything yourself, you have control over both of these things, though of course you also have to shoulder the responsibility, and the cost. Indies can keep their books in print as long as they like, can set their own prices to entice readers, and make a higher percentage per book than authors working with publishers and agents. I heard repeatedly about people who were building solid, rewarding careers as novelists without blockbuster successes, by working steadily and intelligently. It sounded very appealing. Lindsay Buroker, for instance, talks about this on an episode of Joanna Penn’s podcast, and on her blog. She’s made this work in particular with her fantasy series, The Emperor’s Edge—which I’ve recently started reading, and I have to say is really addictive.

Still I wasn’t sure. I read more, on the net and in books, and turned over different possibilities. I learned a lot of details about the process that I didn’t really need to know yet. Sometimes I felt like I was definitely going to do this; sometimes I thought I was crazy for contemplating it.

Catherine Ryan Howard, in her book Self-Printed, suggests that the way to determine if you’re ready to self-publish is to do the rounds with queries; when you get back encouraging, “We wish we could publish this” rejections, you’ll know you’re ready. I see the logic in this, but ultimately I didn’t do it myself. I guess I realized I wanted to make an actual decision, not arrive at one through a process of elimination. So I haven’t sent out a single query for From All False Doctrine.

For a while I was excited about the idea of a writers’ collective, which seemed halfway between a publisher and the straight-up self-publishing route. I still think that’s a great idea, and some authors have made it work: the Triskele group is the one I have read the most about. Turns out, though, for all intents and purposes they really are self-publishing; they just use the Triskele name in their publicity efforts. I’m not sure how other collectives work; part of the reason I lost interest in this idea was that it was hard to find specific models to follow, particularly for how to organize the financial side of such a collaboration. 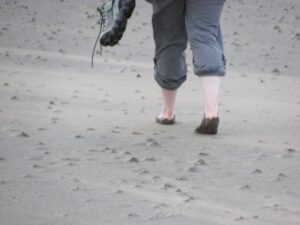 At this point I lose track of the sequence of events somewhat. I finished the draft of False Doctrine. It took me almost exactly two years from starting to write to finishing. I did a thorough edit. I’m the kind of writer who edits a lot in the process of writing, so this stage didn’t take very long. My thinking began to shift from nebulous ideas about writers’ collectives to more concrete notions of self-publishing. I even had a name in mind. I’d opened an Etsy shop to sell my handmade notebooks, and called it Sexton’s Cottage Books. I thought that would make a pretty good publisher name as well.

At some point I made a list in one of my notebooks, headed “Why Self-Publish.” Here’s a slightly edited version of what I wrote:

Remember the example I used above of a textbook on sheep brains? That’s my dad, who started a company to publish the textbooks he produced with one of his colleagues, beginning in the year I was born. They’re still going strong! I can’t underestimate what a difference it made to know that if I chose to go indie, my family would think it was cool. My parents raised me to place great value on independent thought and not to care what other people think about what I do—but they were never able to convince me not to care what they think. I’m really blessed, because I know that other people who have chosen self-publishing sometimes have a hard time convincing those they care about that they’re making a smart decision and not “giving up on their careers” or doing something weird.

All the while I was mulling over this decision, I was discussing things with my wonderful writer friend Victoria, who was querying her own recently finished novel at the time. She’d been interested in the writers’ collective idea when I was formulating that, and eventually she started talking about self-publishing too. By this time I had read a lot about it and amassed a fair bit of technical information, and I made up a huge diagram of all the steps involved, which I sent to her.

Finally, the last piece fell into place somewhat unexpectedly. I had sent my completed draft to an editor whom I know from church, after she generously offered to take a look at it. In my first conversation with her, I couldn’t work up the courage to say I was thinking of self-publishing until she mentioned it herself—the first time I had heard anyone not on the Internet confirm that it was becoming a respectable option. In February of this year we met to talk about the manuscript. Afterward I wrote to Victoria that I felt I’d reached some kind of watershed. Hearing Pat take the book seriously gave me that vote of confidence I needed to feel that I could make the decision to publish on my own. Of course it helped that she said nice things about the novel, too, and that she was willing to help me polish it. She also agreed that it would be hard to interest a publisher in this one. But I realized the thing I had been lacking was that last piece of validation, the kind of thing I could have got from querying publishers and hearing “This is great but just not for us.” I hadn’t realized that was what I was waiting for. 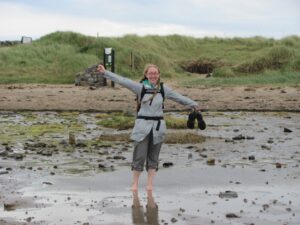 That was February. In April, Victoria, leapfrogging me, published the first of her short stories, “Scheherezade,” and shortly after wrote this lovely post on her blog, luxuriating in the thrill and satisfaction of seeing that someone had bought a copy. That was me! I was her first customer! It totally made my day.

I think Victoria was probably the first person to buy “The Tenants of 7C” when I published it, but it’s hard to say for sure, because three dear friends snapped it up as soon as I let them know it was out. Again, I am totally blessed.