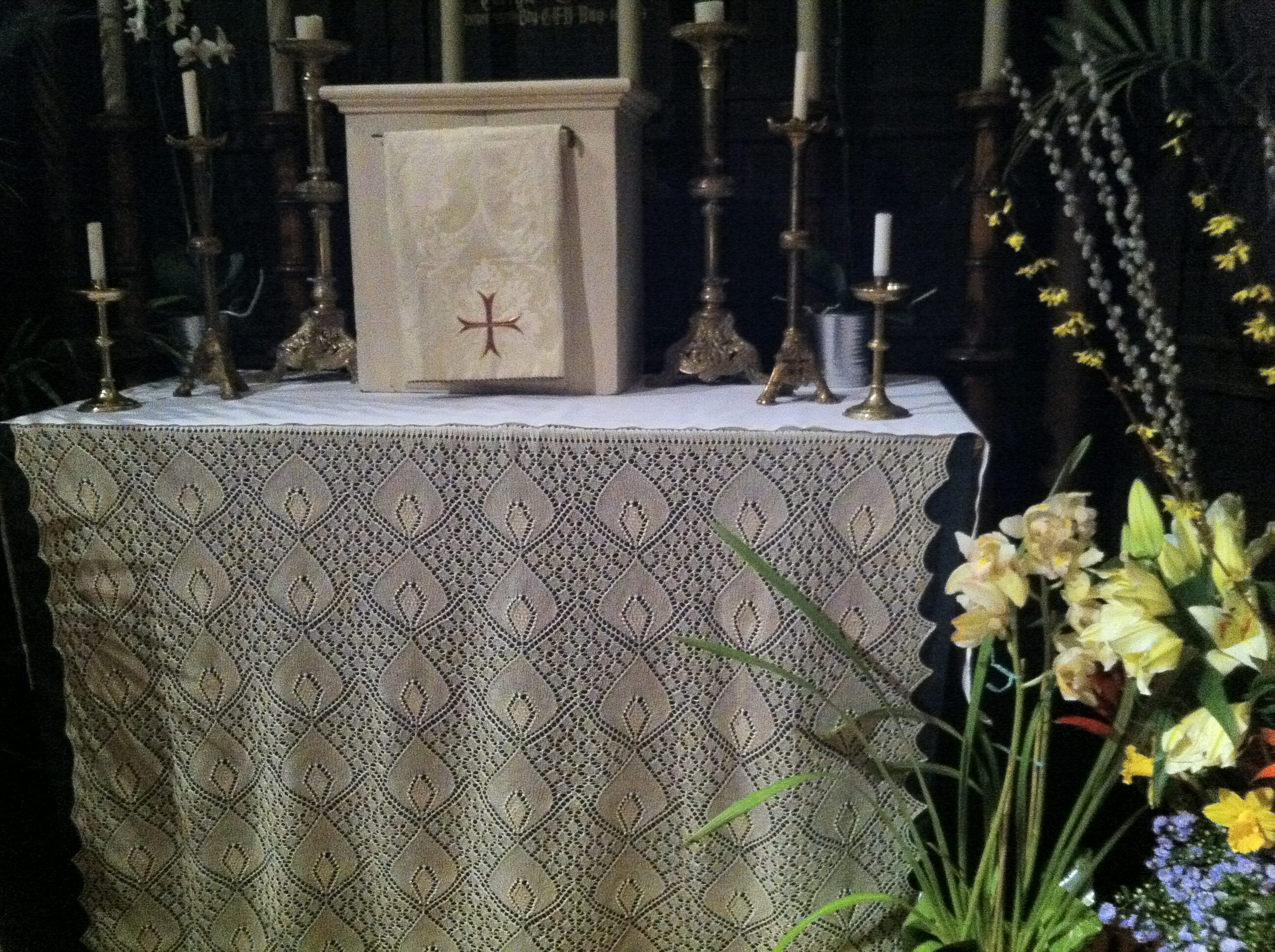 This is a long overdue stab at distilling my thoughts from Maundy Thursday, when my lace handiwork was put to use. The picture above shows the Altar of Repose before the service, when I was able to surreptitiously bring my phone into the church to photograph it. You have to imagine the candlelight!

Somewhere toward the top of the last repeat of the lace pattern, I made a mistake. I never succeeded in figuring out quite what went wrong; it might have been two or three things at once. Instead of ripping anything out, which would be a risky proposition in a loose lace pattern like this, I knit a row that wasn’t quite correct, but that got things back on track. When the fabric was blocked, I could see where this mistake and correction happened: a little wobble in the shape of the “candle flames” across the top row that is different from the other rows. Not a big deal (I can’t even make it out in the picture).

I was scheduled to serve as crucifer on  Maundy Thursday. One of the things the crucifer does is keep the first watch at the Altar of Repose, staying down in the baptistry while everyone else returns to the sanctuary for the stripping of the altar, kneeling at a prayer desk while the lights go off in the church.

I kept telling people that when I was keeping watch, to avoid gloating over my finished handiwork, I was going to stare at that slightly irregular row in the pattern. (Well, I didn’t tell them what I was going to stare at, just that there was a mistake that only I could see. Heh. Pride.) But you know what? When it came to the point, I didn’t do that. I started to, but the whisper I heard was that this would not be worshipful. Instead I did what I’ve always assumed you are supposed to do in the beautiful bower of candles and flowers created for this occasion, which is sort of prayerfully soak in the loveliness of it all. As the lights went off in the nave, all the little beads in the frontal caught the candlelight, and it was as if that put the finishing touch on my work, and it came into its own.

After the service, as people came quietly into the baptistry to pray, it occurred to me that I was also part of this scene. While the other acolytes had stripped out and covered up the finery in the sanctuary, I was part of the tableau in the baptistry, still decked out in the sumptuous white tunicle, picturesquely kneeling amid the flowers. I felt somehow equivalent to my piece of knitted lace.

I spent many hours working on that altar frontal; but those weren’t really hours spent prayerfully. I watched a lot of unedifying television, in fact. I thought about trying to do something more religious while I was working on it, but I wasn’t sure what that could be, and if I’d held myself to that aspiration I don’t know if I would have finished the work. So the finished object doesn’t represent hours and hours of prayer or worship; it just is what it is. It is dedicated to the glory of God and to that particular service in Holy Week, and now it is stored somewhere in the basement or the vault (I’m not sure where), and my own prayer, my own worship, is a different matter, ongoing.