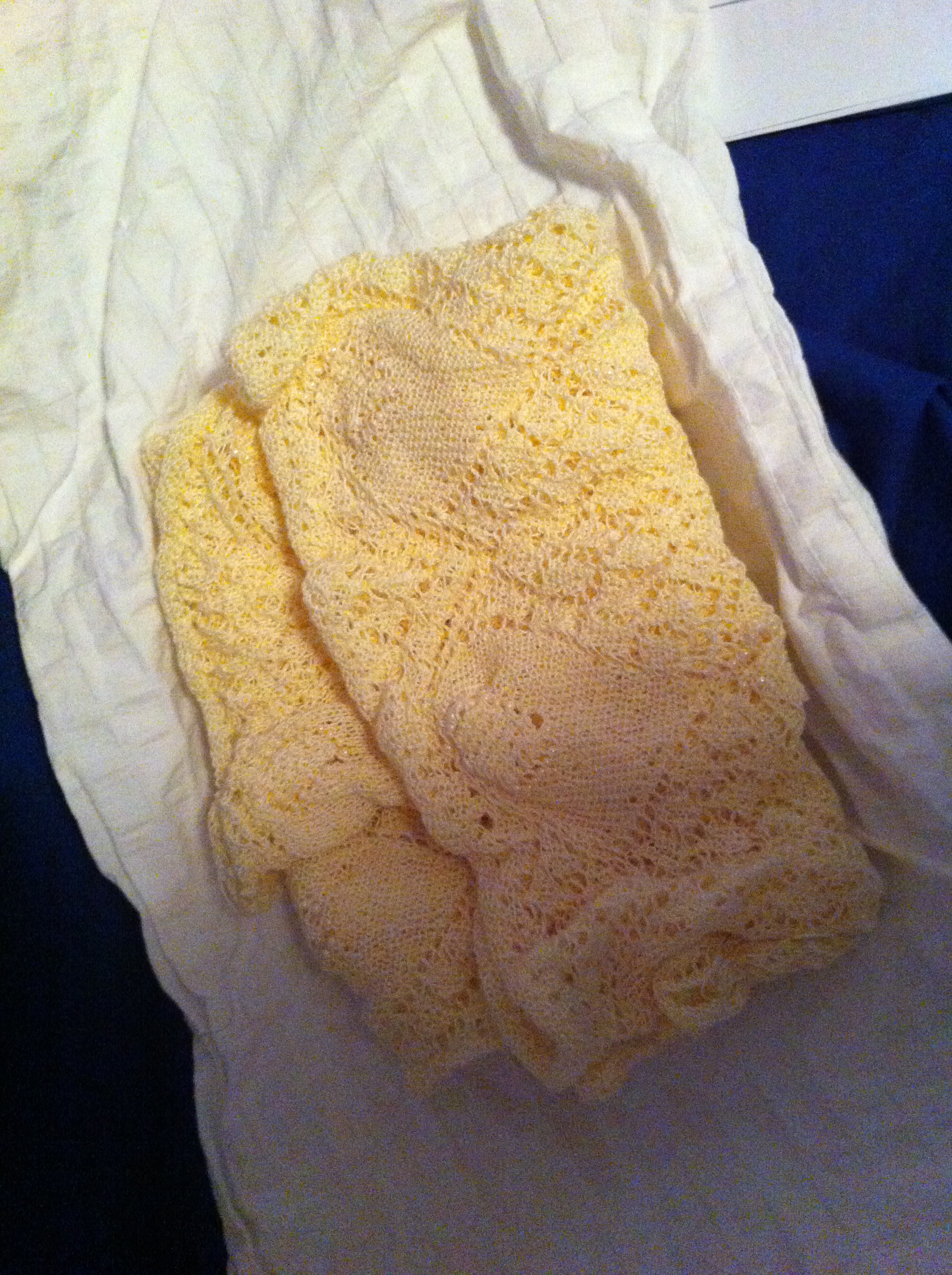 The bundle of finished knitting (wrong side showing). It’s been off the needles for a couple of weeks while I considered exactly what to do with it next. Maundy Thursday is fast approaching… 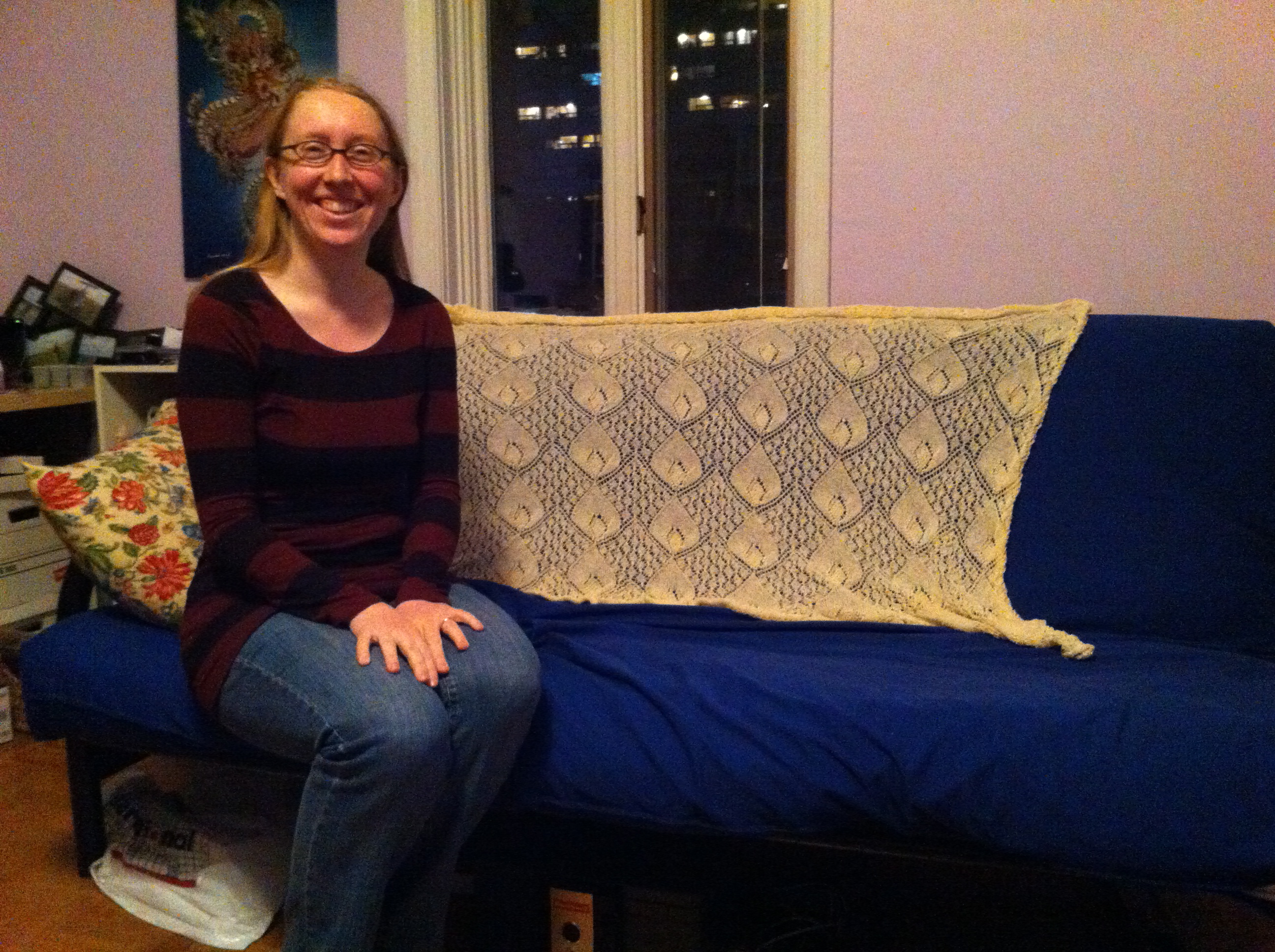 This gives you some idea of the size (unblocked) and of how excited I am at this point. 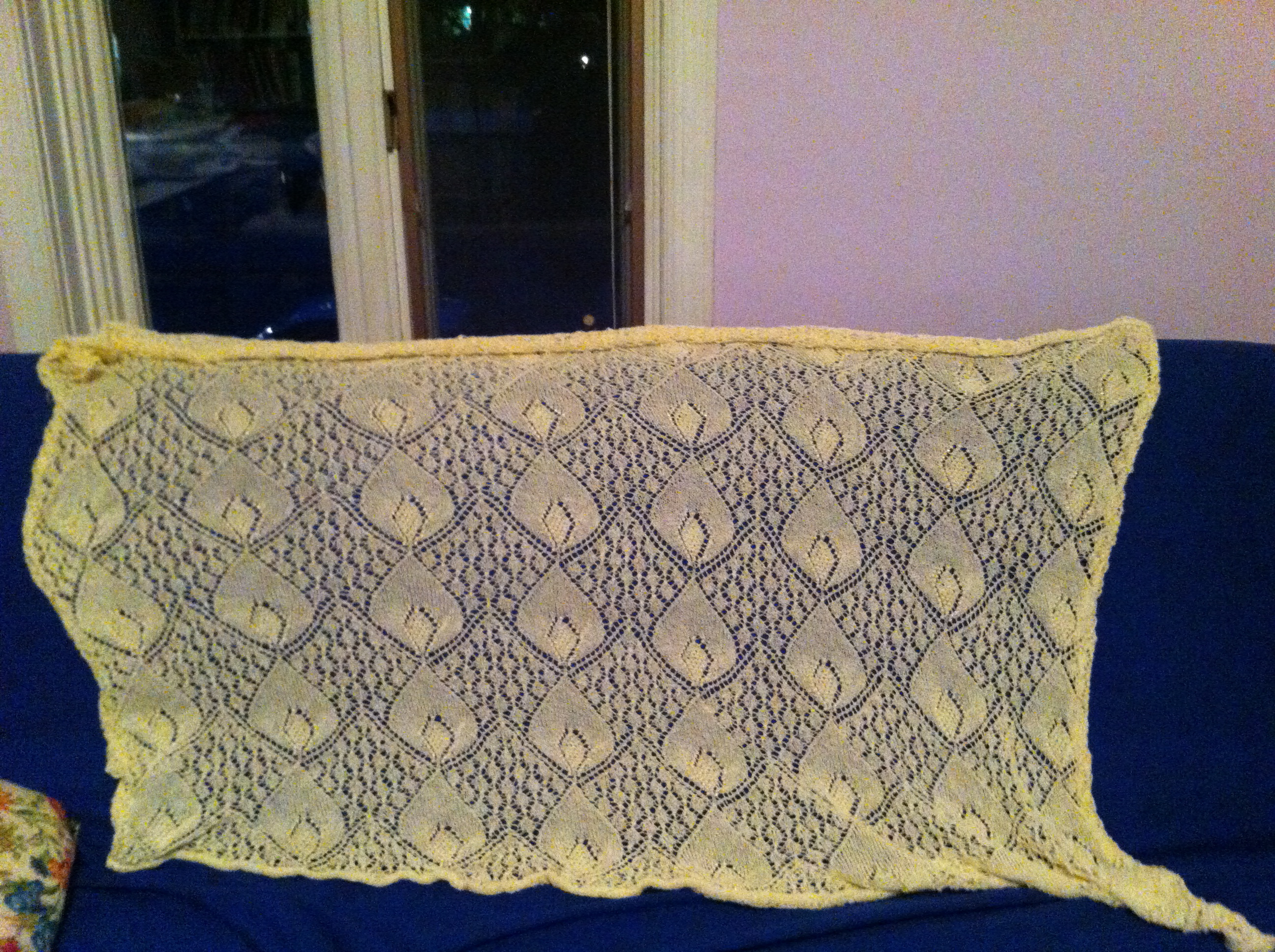 It took me a little under a year to knit this! 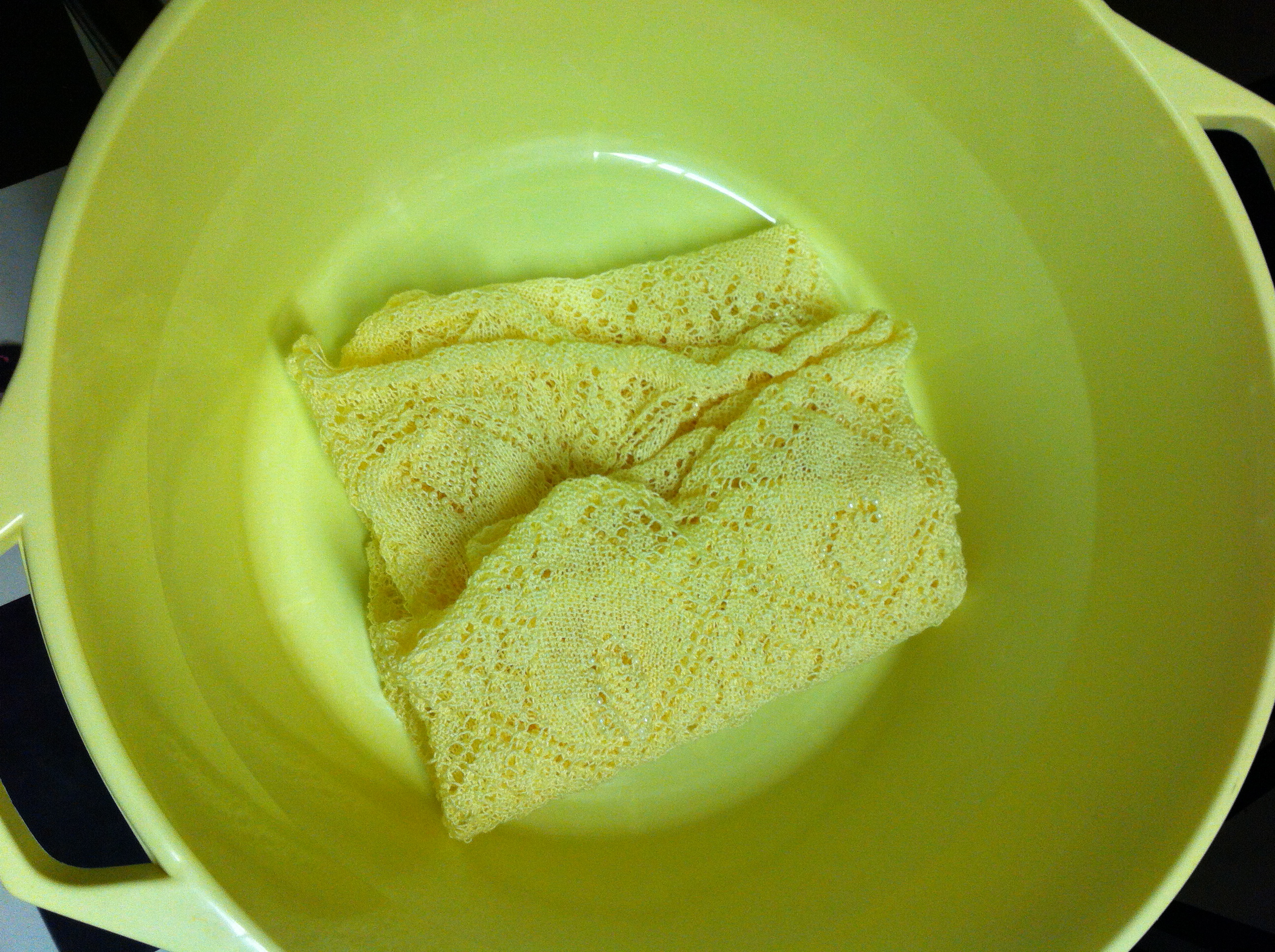 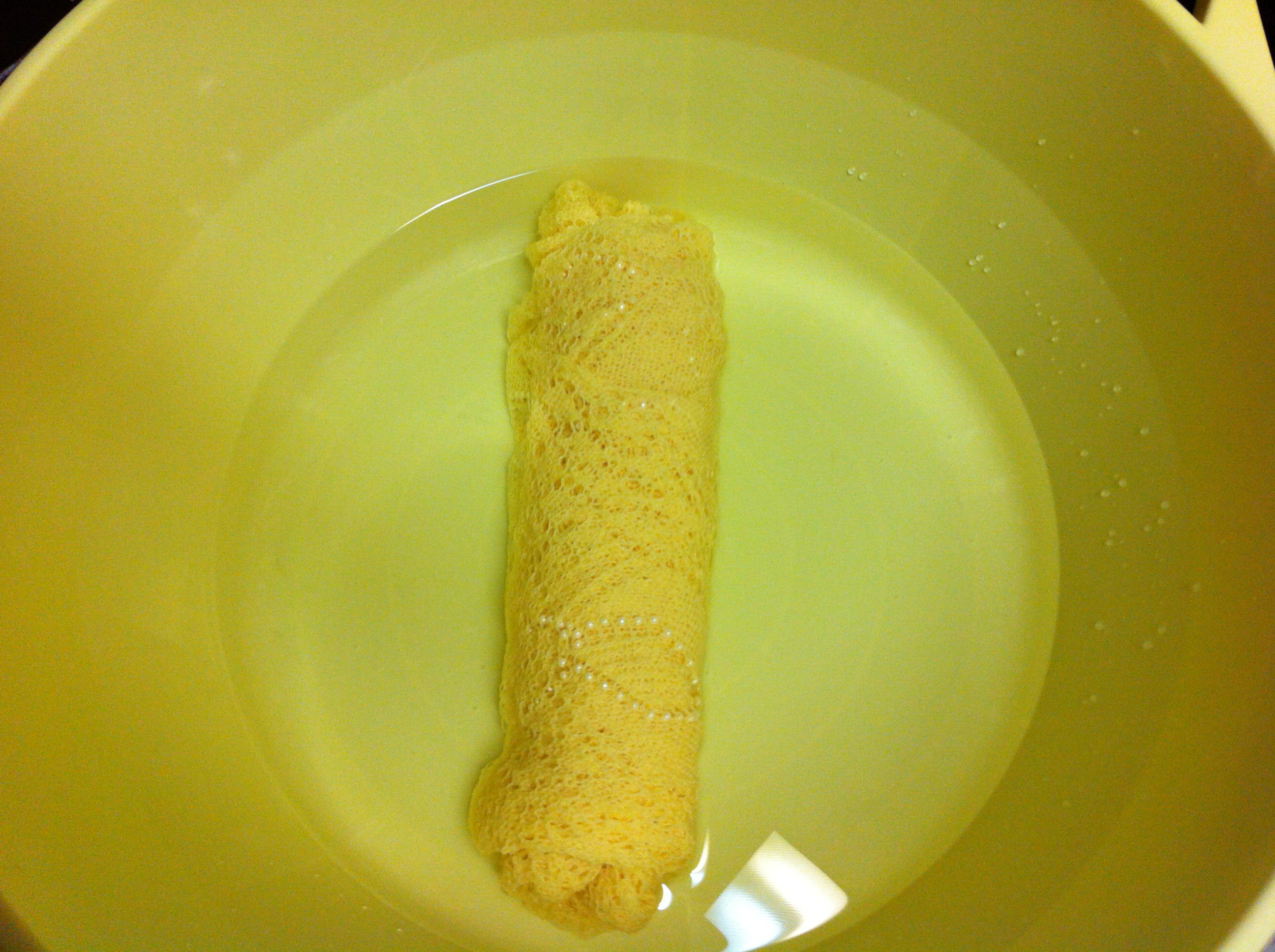 Pour water all over it! Then roll it into a sausage! Did I mention that I spent almost a year knitting this? It took me all afternoon to psyche myself up to do this. But once I had gone this far, it was surprisingly easy to proceed to the next step… 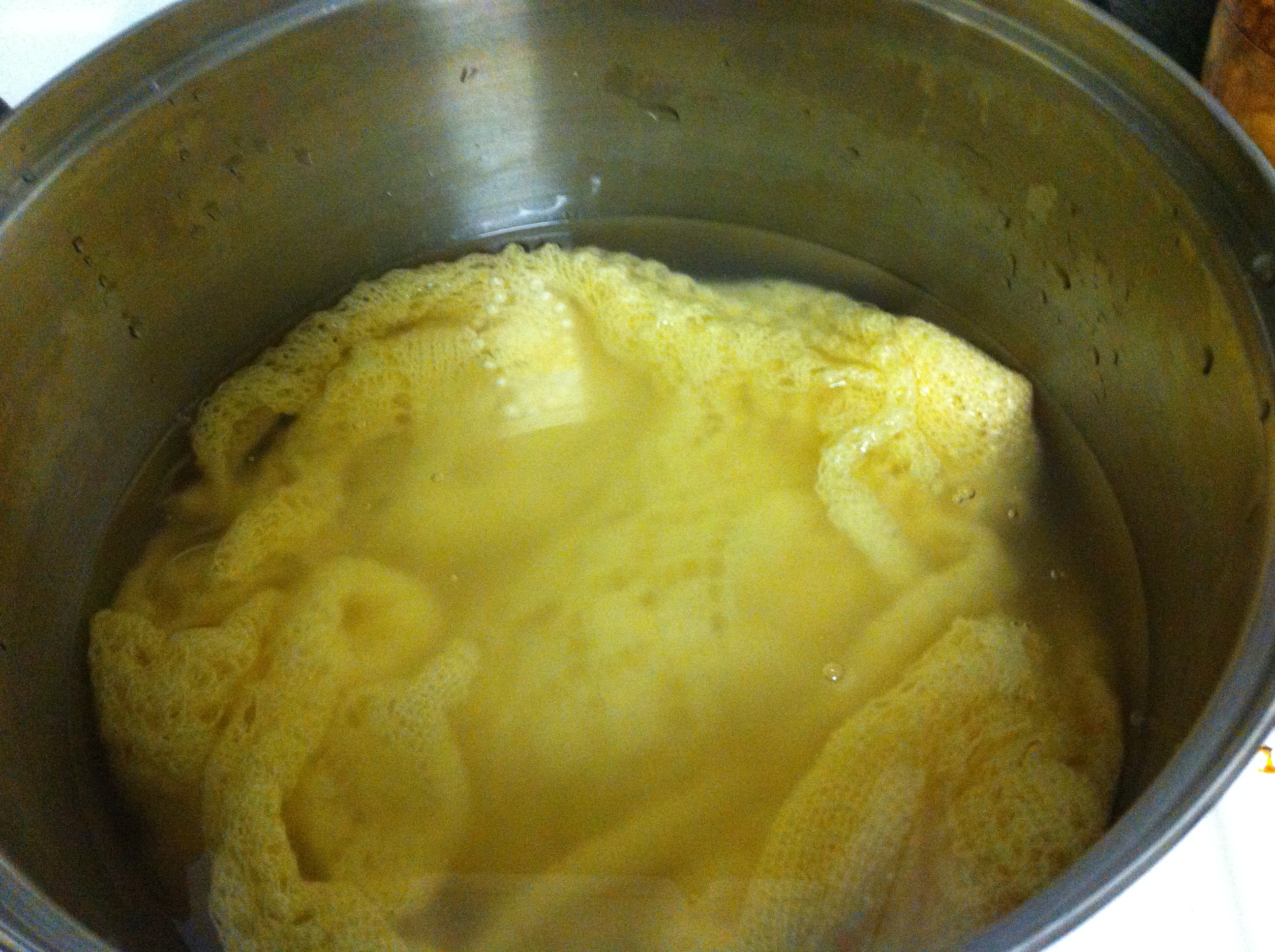 All right, this looks worse that it actually is. It is indeed in a cooking pot on the stove, but the burner is not on, and the water is only tepid at this point. The cloudiness is caused by starch! Yes! This is the old-school way of doing this. I believe modern people buy spray-starch in a bottle or something. Whatever. This method was actually quite easy. 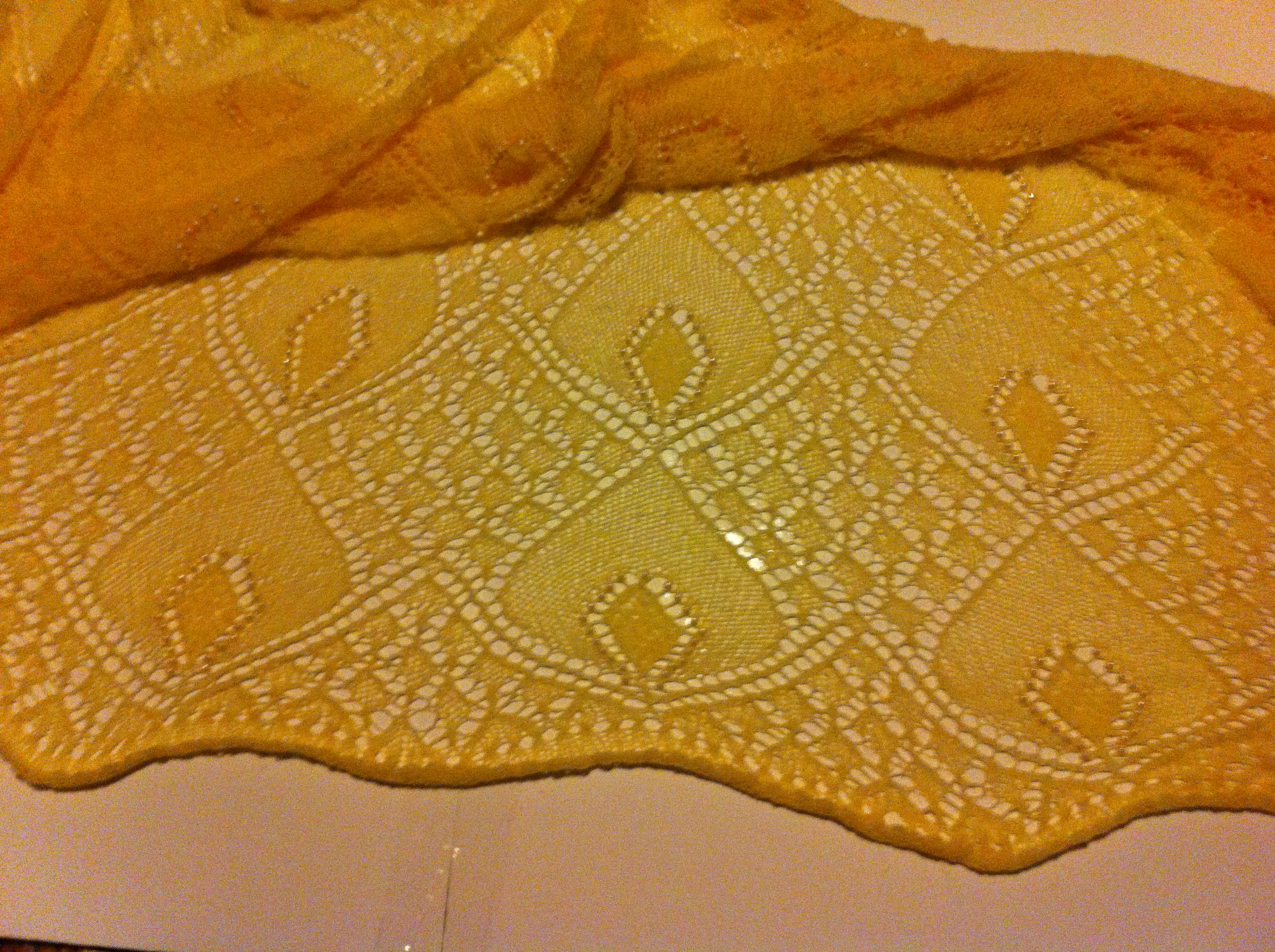 Starting to stretch it out on two large sheets of foam-core taped together… It is sopping wet at this point, and the beads make fun clacking noises as I’m spreading it out. Side note: I had originally planned to do this in the basement, with the sheets of foam-core propped against a table, but I quickly had to switch to Plan B (flat on the living-room floor) when I realized just how wet the fabric was, and how heavy! It would have stretched completely out of shape, and the pins at the top wouldn’t have been able to hold it up. Fortunately, I no longer live in a bachelor apartment! (Remind me to tell you the one about how I cut out the skirt of my wedding dress, back when I still did live in a bachelor apartment.) 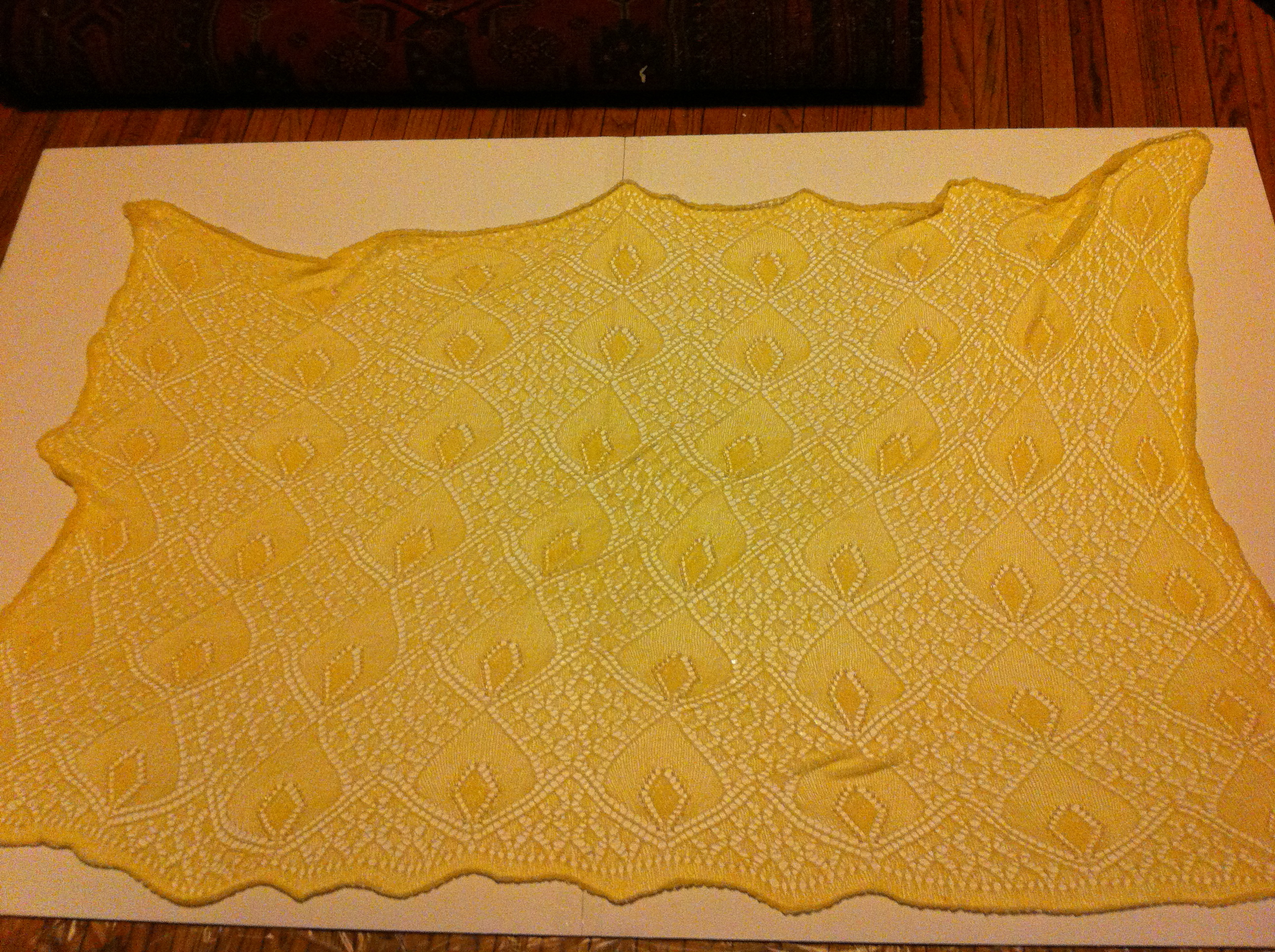 This part was fun initially, though it became less so as the wet fabric became cold and clammy, and the novelty of crawling around on the floor readjusting pins began to wear off. 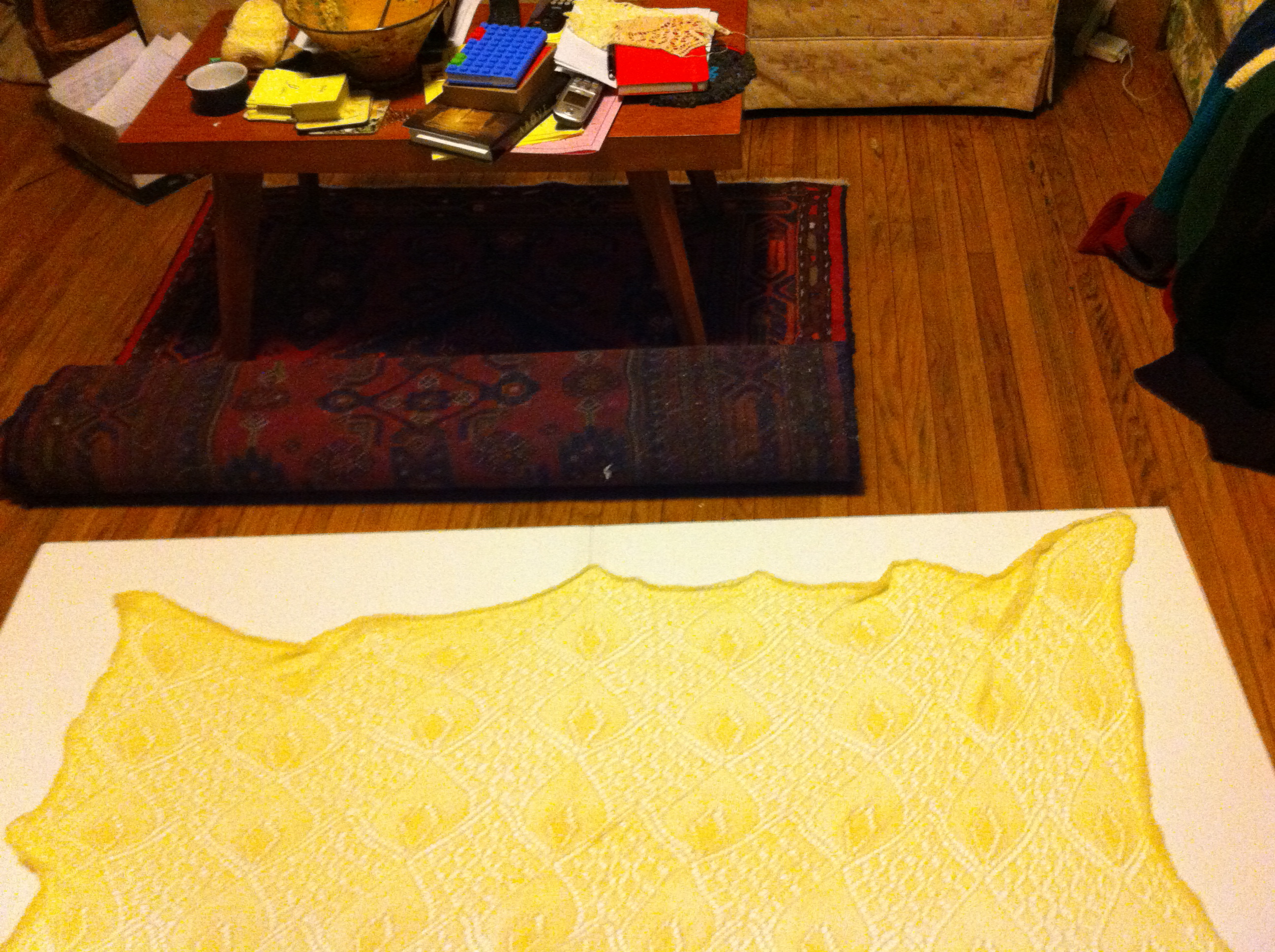 To give you an idea of the scale again. On the coffee table (along with other clutter) you can see a test swatch I did before beginning the full-size project. 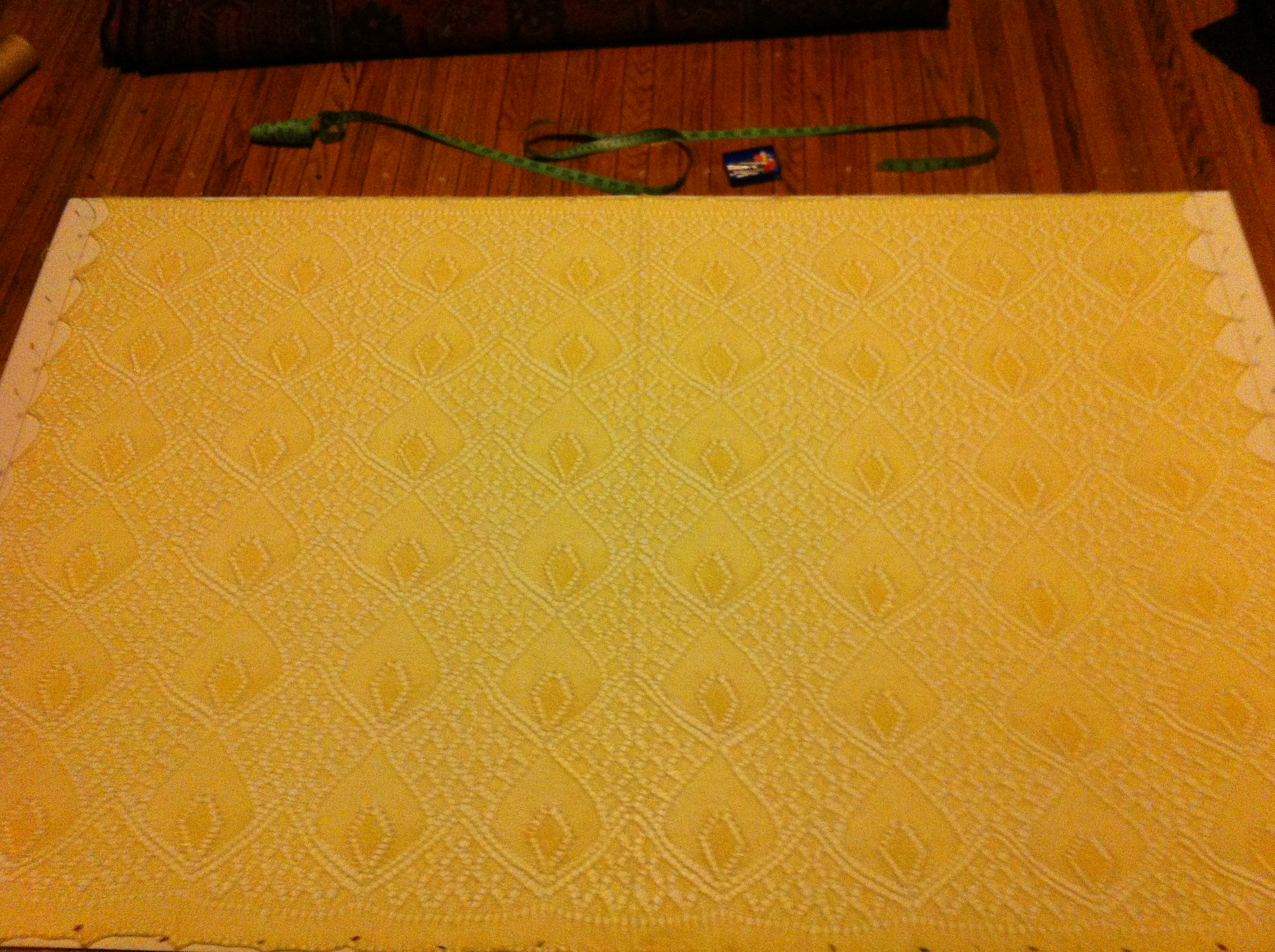 And this is how it looks all pinned out! It will have a dark green background, so it will look quite different in situ. 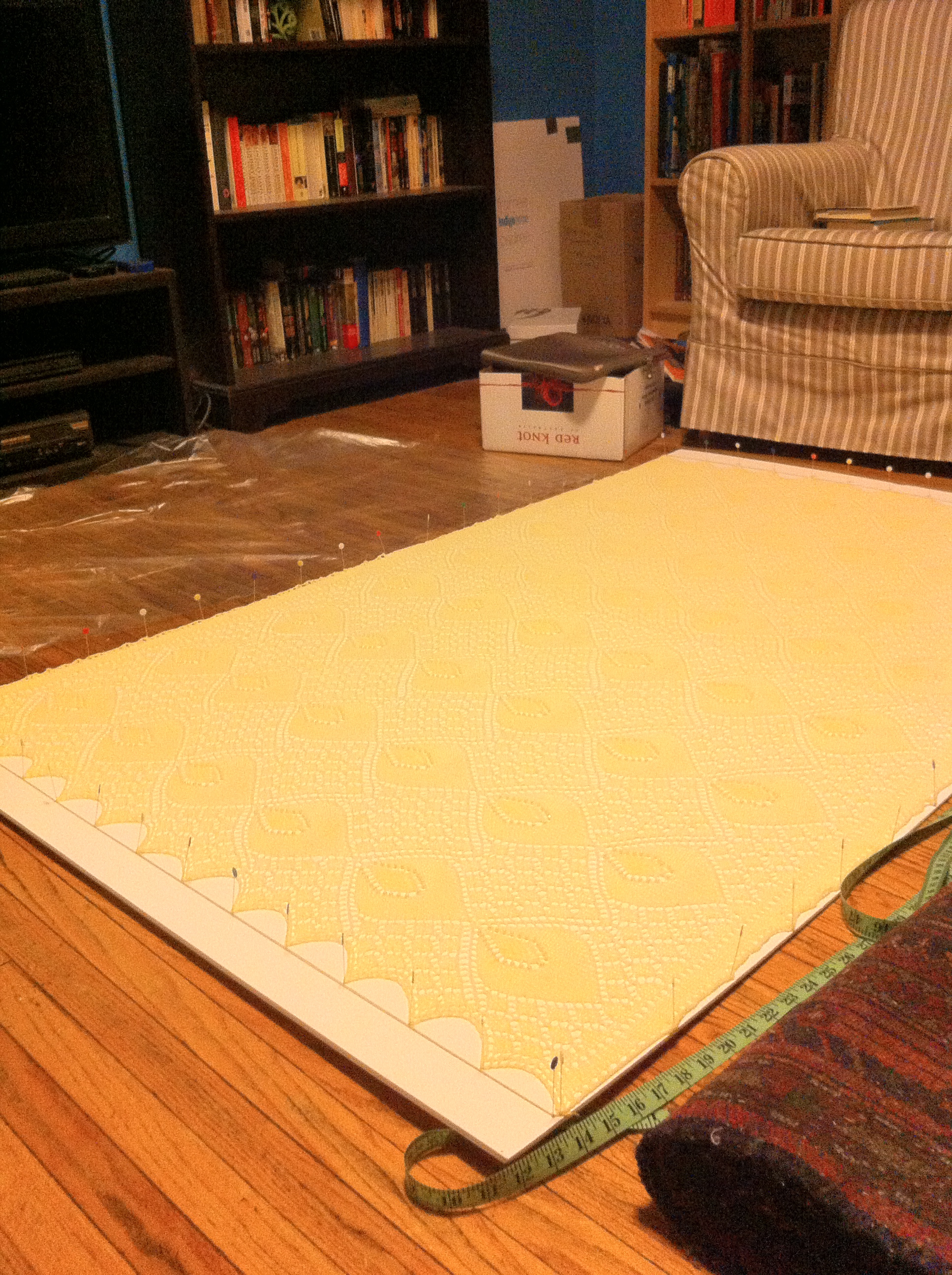 As it dries, the colour is lightening considerably.

For the full effect, come to St. Thomas’s, Huron St., Toronto, on Thursday night at 8:00! This will be on the Altar of Repose in the Baptistry.