Geoffrey de Vinsauf was a fan of plotting. He begins his Poetria Nova with a famous analogy between architecture and poetry: Just as the architect envisions the whole building before the first foundation stone is laid, he says, so the poet must spend time contemplating the shape of the finished poem before writing its first words. Good advice, if you ask me, even when applied to the novel, a form which Geoffrey, writing in the early years of the thirteenth century, did not have in mind. I wondered if any of his other advice might be of interest to the novelist.

After his introductory remarks, Geoffrey discusses the ordering of the story material. (I say “story” rather than “poetry” at this point, because that is really what he is talking about. Although he envisions the narrative being written in verse rather than prose, the remarks in this section apply equally well to either.) There are two basic ways to order your material, but Geoffrey likes one of them better than the other, because it branches off into divisions and subdivisions, and he can really go to town on these. Here is my diagram of how it all plays out: 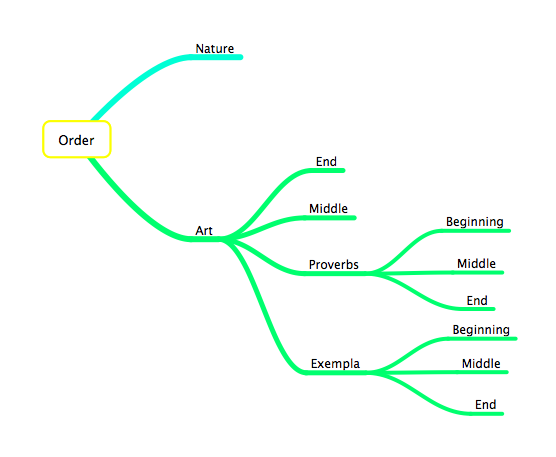 I don’t know whether any of the extant MSS of the Poetria Nova provide a diagram like this.

As you can see, he doesn’t have much to say about the “natural” option for ordering your story material. This is the one that begins, prosaically, at the beginning, with nothing more ingenious than “once upon a time,” and carries on from there. Much more interesting to Geoffrey are the various branches of “Art”: beginning at the end, beginning in the middle, or beginning with a proverb or exemplum (an illustrative image) appropriate to the beginning, the middle, or the end of the story.

Geoffrey offers his own examples of all eight options, eight different ways to begin the same story. They are a little dated, and I won’t repeat them here. In an effort to find some novelistic examples, I conducted an unscientific study involving a nearby bookshelf. Here’s what I found:

The telephone bell was ringing wildly, but without result, since there was no-one in the room but the corpse. (Charles Williams, War in Heaven)

Martha Macnamara stood at the Pacific, her toes digging into the froth. She had come the length of the country in a day’s flight, and she had trouble believing that this was a different ocean. (R.A. MacAvoy, Tea with the Black Dragon)

It was a dark and stormy night.
In her attic bedroom Margaret Murry, wrapped in an old patchwork quilt, sat on the foot of her bed and watched the trees tossing in the frenzied lashing of the wind. Behind the trees clouds scudded frantically across the sky. Every few moments the moon ripped through them, creating wraithlike shadows that raced along the ground. (Madeleine L’Engle, A Wrinkle in Time)

In these times of ours, though concerning the exact year there is no need to be precise, a boat of dirty and disreputable appearance, with two figures in it, floated on the Thames, between Southwark Bridge which is of iron, and London Bridge which is of stone, as an autumn evening was closing in. (Charles Dickens, Our Mutual Friend)

Do any of these examples bear any relation to Geoffrey’s categories? Well, in a way they do. I would say that these are all beginning at the beginning, although that point is debatable. Martha Macnamara, for instance, has been summoned to California by her daughter as a result of events that we don’t learn about until later, and the man under the desk at the beginning of War in Heaven didn’t die of natural causes. But all four begin in different ways with a visual image, which may be as close as you’ll get in a novel to Geoffrey’s category of exempla. Not quite the same thing, admittedly, but some allowance must be made for changing times. More generally, they all do something with the beginning that can reasonably be classified as “Art.”

While I would not go so far, perhaps, as to describe the heart as actually leaden, I must confess that on the eve of starting to do my bit of time at Deverill Hall I was definitely short on chirpiness. I shrank from the prospect of being decanted into a household on chummy terms with a thug like my Aunt Agatha, weakened as I already was by having had her son Thomas, one of our most prominent fiends in human shape, on my hands for three days.
…
But half a jiffy. I’m forgetting that you haven’t the foggiest what all this is about. (P.G. Wodehouse, The Mating Season)

This is of course beginning in the middle, used self-consciously for the sake of comedy. It’s cute. But you wouldn’t want to do it often.

The other two novels I pulled from my shelf were mysteries, and both open somewhere near the end of the story, in one sense, because the murder in each case has already been committed, and the whole book will be devoted to unravelling what happened prior to the opening scene. P.D. James’ Unnatural Causes opens with a description of a corpse floating in a dinghy; Dorothy L. Sayers’ Strong Poison begins later still, in the courtroom where the judge is about to address the jury at the end of the murder trial. In another sense, of course, the beginning of each book is also the beginning of the story, because this where the detective comes into it, and the events of the investigation will change the lives of the characters involved. It’s interesting to note, too, that beginning at the end isn’t the only option for mysteries; they can also begin much closer to the beginning, and take a while to set the scene and introduce characters before presenting the central problem of the crime.

There are novels that begin with proverbs, too, or at least with pithy phrases that have a similar effect. The opening of Pride and Prejudice is a good example that comes to mind; A Tale of Two Cities would be another. Even something like this basically fits the category:

In the land of Ingary, where such things as seven-league boots and cloaks of invisibility really exist, it is quite a misfortune to be born the eldest of three. Everyone knows you are the one who will fail first, and worst, if the three of you set out to seek your fortunes. (Diana Wynne Jones, Howl’s Moving Castle)

The natural beginning also has its place, as for example in most of Austen’s novels other than Pride and Prejudice, which begin with an account of the family history of the central characters. This style of beginning does sound somewhat old-fashioned today, but it can be very effective in novels that evoke something of a fairytale atmosphere, as for example in the opening of Patricia McKillip’s Forgotten Beasts of Eld. It would seem that you can in fact go far by adhering to this advice from the thirteenth century.

Geoffrey allows that there are other techniques for beginning a story besides proverbs and exempla, but he declines to teach them: “The others are of less worth and more recent appearance; the sanction of time favours the two forms mentioned.”¹ I pass it along for what it’s worth.