I’m working on a lace knitting project. It’s large and complicated, but not especially difficult; to understand the distinction, if you’re not a knitter, think of a recipe that involves a large number of ingredients, takes a long time to prepare, but doesn’t require any great technical feats of knife work or pastry handling. It’s fun. It’s progressing quickly, mostly because I can’t stop working on it.

This isn’t uncommon. There is something about knitting that breeds obsession: knitters become obsessed with amassing yarn, with thinking of things that could be knitted (especially things that really don’t need to be knitted), and just with the process itself. It’s the hypnotic power of the enjoyable project that gets me. When a knitting project is going well, I have a hard time putting it down. On the other hand, when it goes badly, or gets difficult, I find it all too easy to abandon it, even at an advanced stage very near completion. I have drawers full of knitted things that were seductively fun up to the point where something went wrong and I couldn’t figure out what it was, or I would have to do something unfun such as sew pieces together, or block something, or find some matching yarn, or rip something out and knit it again. Basically, what I want out of a knitting project is the central experience of sitting in a chair with yarn and needles, actually knitting; I have a pitifully low tolerance for everything else.

Over time, I’ve realized that there are certain types of knitting that deliver the type of enjoyment I want, with a higher-than-average chance I’ll actually finish the project. I only want to work with one colour of yarn at a time, for instance; stranded knitting is beyond my threshold of complexity. Things with sleeves—ugh. Socks? Please. On the other hand, I don’t mind working with a chart, and I can stand a fair bit of complexity when it comes to knitting lace: 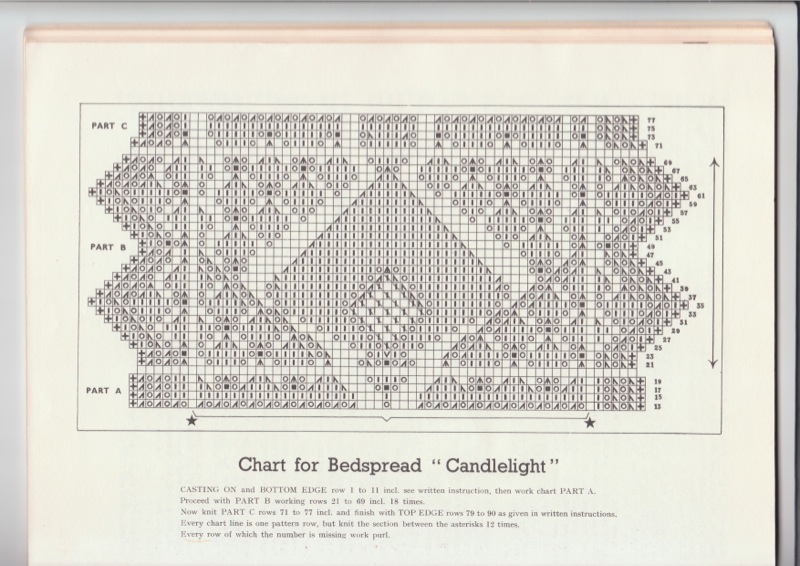 I’m not knitting a bedspread, by the way. (You’ll see.)

I have even published a pattern for a lace shawl, and sold a lot of copies during a brief and modest flurry of online celebrity as a result of being photographed by a famous knit-blogger. But it was an isolated incident; I didn’t go on to a career as a shawl designer, and I know I’m not likely to.

In the last chapter of his book Culture Making, Andy Crouch offers an interesting take on creative callings, based on the parable of the sower. He likens different types of cultural activity (the creation of any kind of “cultural goods” in the world) to the seed scattered by the sower, which may fall on fertile soil and flourish abundantly, or may instead meet with various mishaps that prevent it producing grain. Although we cannot predict the outcome of our creative endeavours, we can direct our energies based on our observation of what happens when we attempt certain things:

Do we see a divine multiplication at work after we have done our best? Does a riotous abundance of grain spring up from a tiny, compact seed? This is grace: unearned, unexpected abundance that can leave us dizzy with joy. It is a return on investment that exceeds anything we could explain by our own effectiveness or efforts.

If God is at work in every sphere and scale of human culture, then such supernaturally abundant results are potentially present whenever we take the risk of creating a new cultural good. (Culture Making, p. 254)

Crouch goes on to discuss examples from his own life of activities and interests that fit the description of the seeds eaten by birds or planted on stony ground: things that fizzled quickly, or that seemed promising in childhood and adolescence, only to become unrealistic in adulthood. “But,” he writes, “my most subtle and difficult challenges in culture making have been like the seed that falls among thorns, which does indeed produce a leafy green plant, but never produces fruit because of the thorns entwined around its roots.” This seems like a negative image, but he is talking about the kind of activity that may make a satisfying hobby, but will simply never be a vocation. With these activities, Crouch writes, “what I accomplish is directly related to the sweat of my brow… I have worked hard, and I have what I worked for,” but nothing more, no divine multiplication or abundance.

For some people, lace knitting is a creative calling, a seed producing a glorious yield of grain. For me, it’s more like Crouch’s description of the seed growing among thorns. I can do a decent job of following a pattern, and I feel pretty pleased with myself when I can introduce a minor variation. (Did you see the beads in the photograph at the top of the post? Those beads were my idea. I’m pretty happy about those beads. They’re not a major design feature, though.) I can create objects, but they are generally based on other people’s ideas. Where my own ideas enter into the process, they are small and infrequent.

That’s all okay; I’m not complaining. It’s just that this craft is not where I come closest to baking from scratch. That doesn’t mean I should give it up—though it might mean that I should do what I can to dial down the obsession a little bit. Wish me luck.